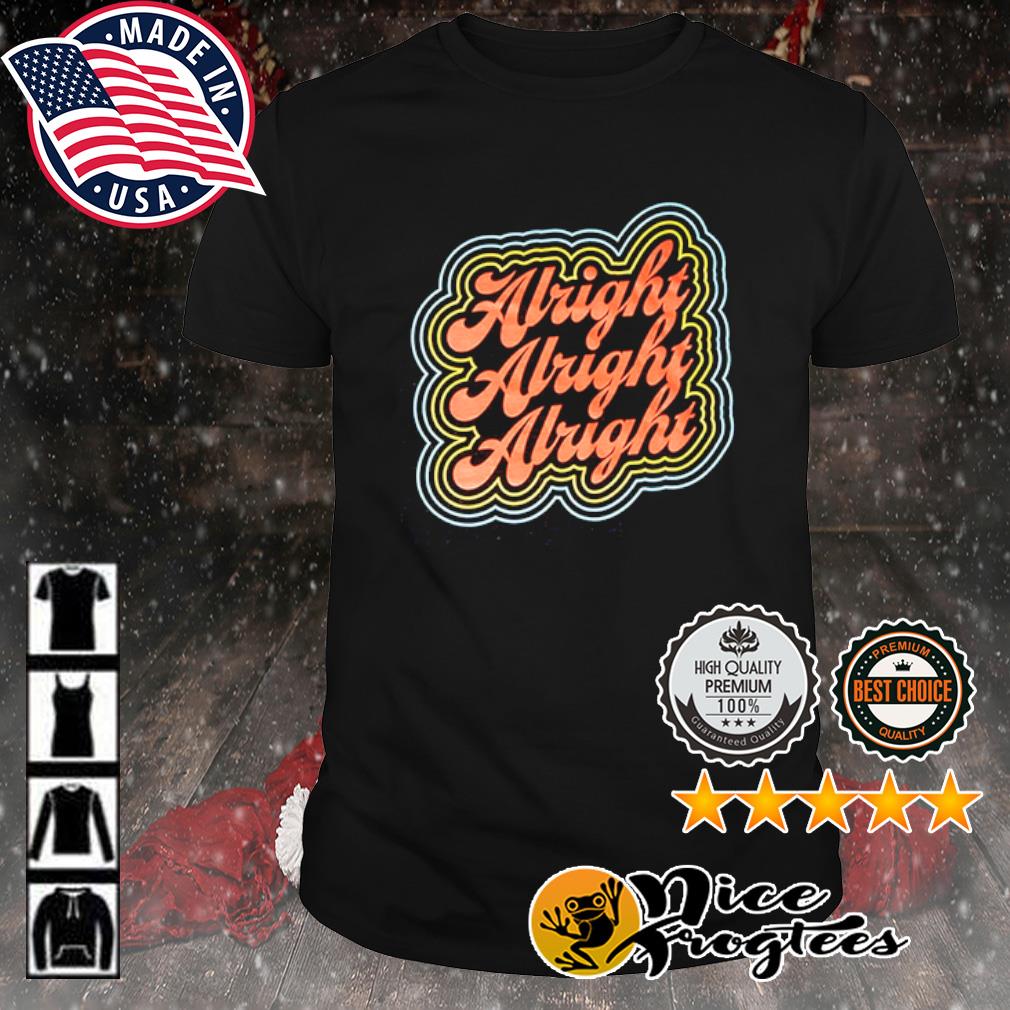 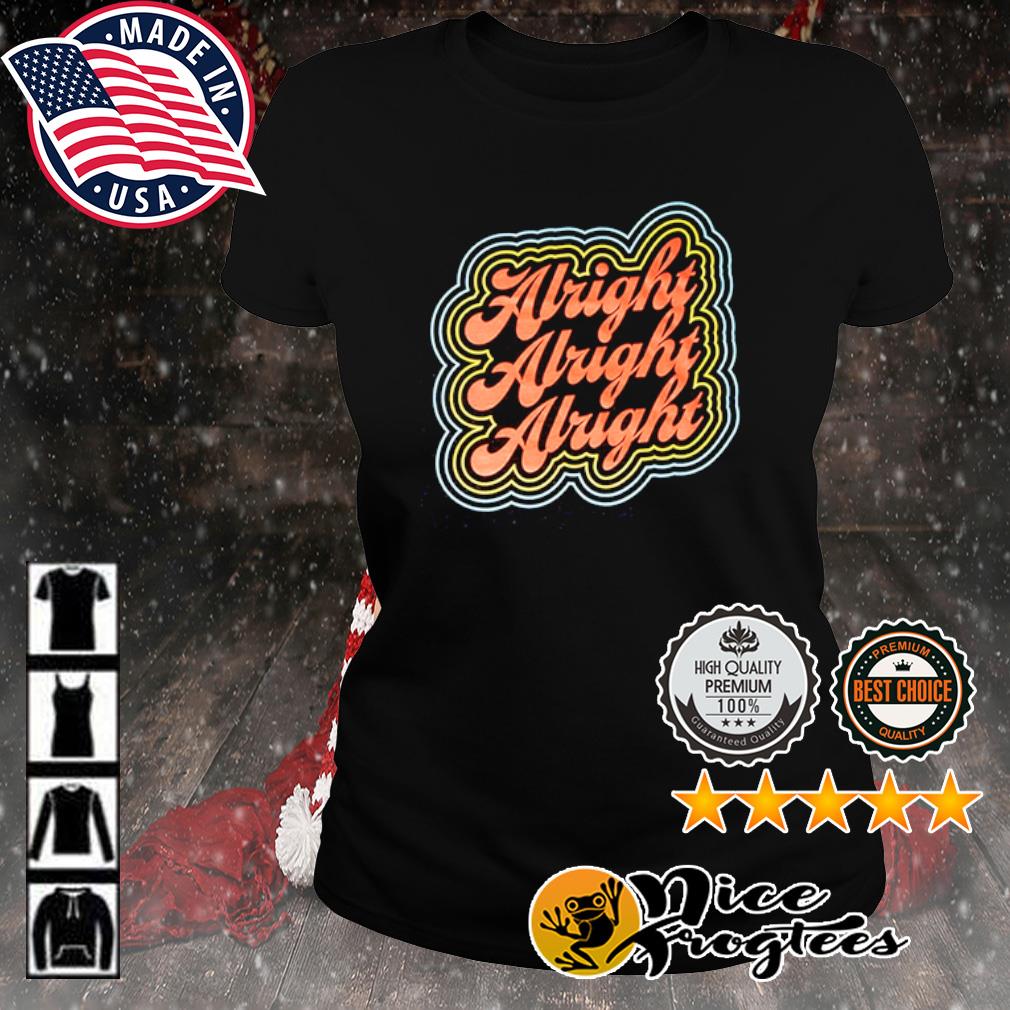 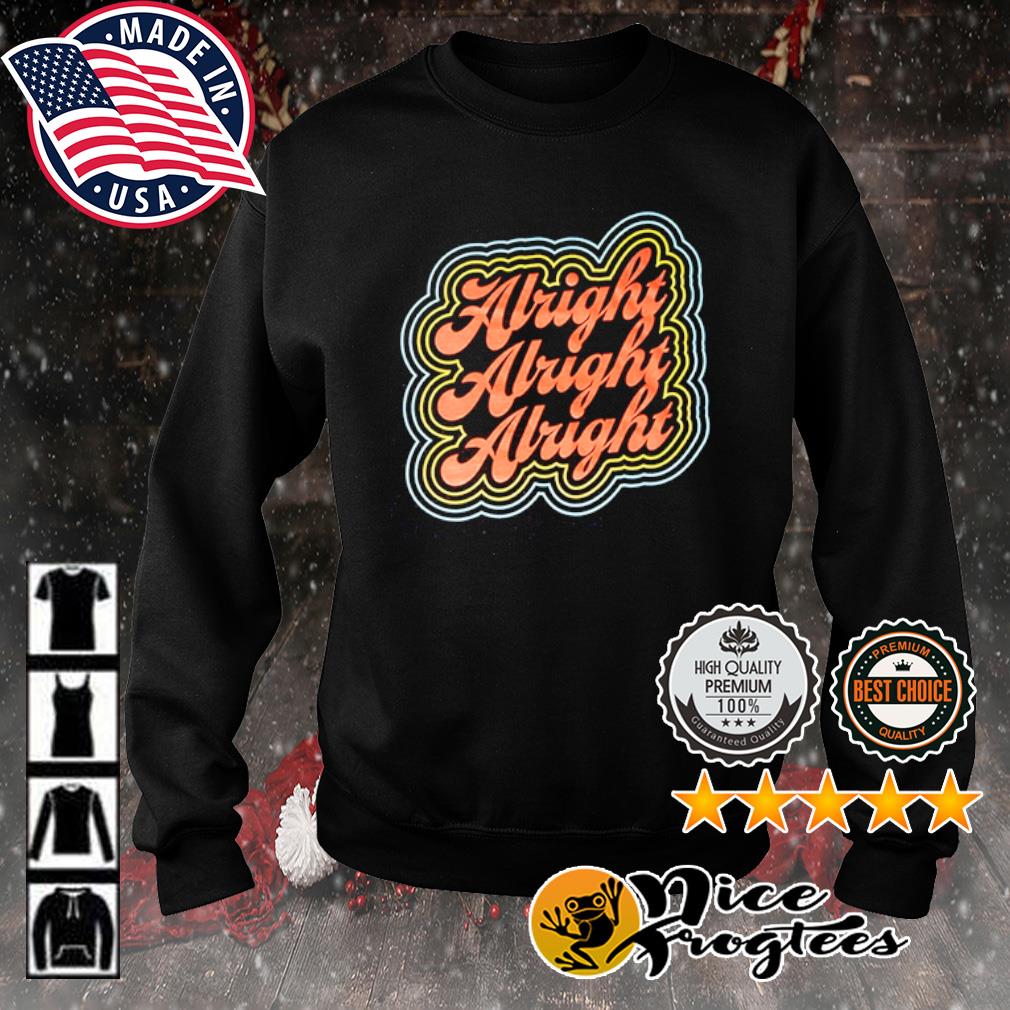 My dad played rugby in college. The majority of the Alright Alright Alright shirt so you should to go to store and get this guys on the team were of Polynesian descent. One weekend they’re on a road trip up in Montana or something and they have to spend the night. Being poor cheap college aged guys they just loaded up a dozen or so people in one room and slept on the floor or wherever they could find space. Middle of the night he had one of his waking dreams that he is fighting for his life. He starts screaming and running around wildly, tripping over bodies. He grabs one of the motel room chairs and slams it against the wall. At this point the light comes on and there are 10 giant Polynesian guys staring wide eyed at the crazy white guy with blood running down his arms still holding the remains of a wooden chair. When me dad was a teenager he was in the middle of a book about the holocaust and dreamed that he was being loaded up into one of the boxcars to be taken to a camp. He saw a window in the boxcar and decided to punch it out and try to escape. He woke up with his fist through his bedroom window, again bleeding heavily. Of course they do. Quora is actually a very family-friendly company, with good benefits, 3 months paid parental leave for both new moms and dads, and a very understanding attitude about the need for personal and family time. Many employees are married or in serious relationships, and there are quite a few parents. Five babies have been born since I started at the company two years ago, including my own little one who just joined us a few weeks ago. Honestly, people get unnecessarily spun up about this issue when it comes to startups. I’ll admit that language like the primary focus of your life doesn’t help, though the intention of that line is that you will focus on Quora before side projects or other work, not that you will focus on Quora before your family. No one at any level of the company would suggest or expect that you do that. I think the tension between work and family is a false dilemma at pretty much any company unless you founded/run it, in which case you have extraordinary responsibilities to manage. The fact is that it is your responsibility to balance your work and family life no matter what company you work for. If you need to leave at 5pm, then leave at 5pm. Don’t apologize for it, just do it. Protect the schedule you need to have, and if it causes problems, proactively work to resolve them.

The flip side of this is that you now have a responsibility to make the Alright Alright Alright shirt so you should to go to store and get this most of the hours you work. If you go home at 5 and don’t check email at night, don’t take two hour lunches or spend the afternoon screwing around at the ping-pong table. Get in early and get your work done before you go home. If you work remotely, be damn sure that you can be just as productive at home as you can in the office. Quora is a pretty awesome place to work and the expectations of all employees are high. I work tremendously hard at my job. That said, I don’t feel that it has compromised my performance or expectations to do things like be home to cook dinner most nights, support my family through emergencies, or have a baby. Part of that is Quora being awesome, and part of it is me taking care to maintain my work-life balance. Most of my dad’s blood is Pashtun alongside with a small amount of Mughal heritage. We managed to keep our Pashtun genes going for quite a while although there was a couple of inter mixed marriages on my family tree. Long story short we call ourselves Pathans because my dad’s blood is mostly this and him, his dad, and his dad before him were Pathans (grandmother does have Pashtun heritage from her mother. My Pashtun side originated from Afghanistan like most pathans do. They left Afghanistan as they were Pro-British in the army mid-1850’s. They settled on a border town called Landi Kotal in present day Pakistan. My great-great grandfather is said to have come from there. He and his siblings left Landi Kotal because of some feud. I am not sure what it was about but it was either tribal or family-related for extra info we are Yousufzai Pathans. They settled in Gujrat, Punjab and started a family there. One of his siblings went to Rahim Yar Khan, Punjab. No one passed down our culture, heritage, language or anything down the family. This was to prevent future generations from returning to our ancestral soil most likely because there was still people who could cause trouble there but I don’t know for sure. However my great aunt did marry a Pashtun and I believe she went and settled in Bannu, KPK. The only thing we have is a couple of stories passed down, one war paper from my great great grandfather, our tribe name and which town we came from.